Stucco is a popular siding for both new and existing homes. It’s made from cement, lime, sand, and water, and encases most or all of a home’s exterior. Once dried and cured, it forms a protective “shell” that offers durability, heat deflection, and resistance to environmental elements (including fire.) It’s also more affordable when compared to brick or natural stone.

The word “stucco” means “plaster” in Italian, and it’s applied in a similar fashion. A stucco exterior can be finished with either a fine or “rough” texture and finish, or given a more artistic appearance with different designs. Pigment can also be added to stucco since it is color-retentive. In the southwestern US, stucco frequently mimics the appearance of adobe.

While stucco is best suited to areas of the US with dry conditions, it’s used in homebuilding in all 50 states. If the stucco is improperly applied by the homebuilder or subcontractor, it could lead to serious damage in your home that could be expensive to repair. This is what’s known as “defective construction.” 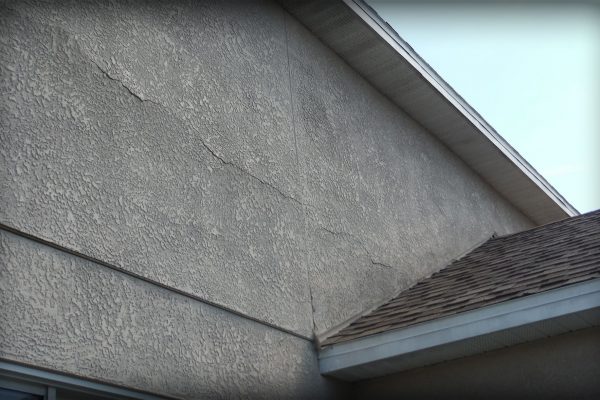 Applying stucco is a multi-layered process prior to the application of the mixture. Because it’s applied manually in a paste-like consistency to dry, stucco needs the support of reinforcement underneath to keep it in place on the structure. Stucco is porous, so the supporting reinforcement should include a moisture barrier to prevent water intrusion into the home.

Unfortunately, many homebuilders cut corners in several areas to get a structure built, completed and sold so they can move onto the next one. They may neglect flashing, fail to install one layer of the support system, or the important moisture barrier to prevent water invasion.

Stucco that isn’t properly applied can crack prematurely and fail to protect your home from moisture that can cause wood rot, mold, mildew, bacteria, and insect infestation such as termites. Windows, doors, skylights and other portals are frequently problem areas for stucco because of improperly applied or omitted flashing. By the time you discover the problem, your home could be in very bad condition and become an inhabitable hazard.

If you home already has a crack or other defect in the stucco, it will soon become a bigger problem. Water is likely seeping behind the stucco layer and into the home. The longer you avoid repair or remediation, the more time you give the problem to get bigger. Stucco problems expand when left unchecked. Cracks and other problems with stucco require immediate attention so that they don’t get out of hand, leading to more serious damage over time.

Homeowners looking for answers may be told to simply caulk the cracks and paint every three years. But unless the source of the problem is corrected, the cracks simply return later.

Chances are that the cracks appear after the builder’s warranty period has already ended. When you ask for help, you’re told it’s too late. Most homeowner’s insurance policies don’t cover damage from defective stucco, or consider it part of a flood policy. By this time, your home needs very expensive repair as well as remediation to correct the improperly applied stucco.

Who Is Responsible For Defective Stucco?

Nationwide, homes built during the most recent housing boom between 1990 and the late 2000s were built quickly and with improperly installed stucco. This exterior is particularly popular in Florida where they saw an increase in the construction of homes, condominiums and townhomes during the same period. Because of the fast and improper installation, it’s now known as “Florida’s billion-dollar stucco problem.”

Many of the biggest homebuilders in the US have been ordered to pay millions in restitution for defective stucco construction that left millions of homebuyers around the US with expensive damages. KB Homes, Toll Brothers, Pulte Homes and D.R. Horton are four of the leading large homebuilding companies involved in defective stucco litigation.

As a rule, the party who installed the stucco is at fault after it caused damage to a home. That could be the homebuilder, or it could be a subcontractor hired by the builder for installation. Subcontractors may employ people who are unaware of the state’s specific building codes regarding stucco.

Much will depend on the local building codes in your area. For instance, Florida requires a minimum of about three-quarters of an inch of stucco on a house. Unfortunately, many people have discovered that their professionally built home only has a scant one-quarter inch or less in place.

Because the damage doesn’t appear within the warranty period, the builder may tell you that it’s your fault for waiting too long to make the claim. Of course, the builder may tell you that to deflect responsibility and give misinformation about your options. At this point, speaking to a defective construction attorney will get you the answers you need.

Many homeowners don’t notice the damage for two or three years, and may not realize that it’s stucco-related. In other homes, the damage may manifest more than ten years from the date of occupancy, which is long past the end of most homebuilder’s warranties.

If your home exhibits damage because of improperly applied stucco, one of the first things to consider is to have the exterior inspected. Make sure that the damage is highlighted and documented. Next, obtain a quote for repair and remediation of the damages. Take this information to an attorney who specializes in defective construction cases involving stucco.

Each state has its own statute of limitations on when a homeowner can file a claim. An attorney who understands defective construction cases can advise you on your claim and any possible options. The attorney will file your claim which can include compensation for the out-of-pocket expenses of remediation, decreased property value, lost use (if applicable) as well as attorney’s fees and possible punitive damages.

Speak With A Defective Construction Attorney

Stucco damage can destroy a house from the inside out. Homebuilders who fail to properly construct a stucco exterior should be responsible for these construction defects and the damage they caused.

Dealing with defective construction is a complicated undertaking. If you believe your home suffered damages because of improperly applied and installed stucco, you may be able to recover damages to cover the repairs. Contact us today to schedule your free consultation appointment.

How A Personal Injury Lawyer Can Help You
Scroll to top